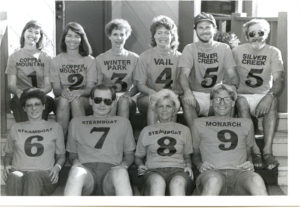 Bud Dunbar, “Father” of the Ski Club, in 1954, placed an Ad in the Daily Oklahoman reading “WANTED: Skiers interested in organizing a club contact Bud Dunbar.” 22 people responded and met at the urging of Ruth and Bud Dunbar to form the Sooner Ski Club. The Sooner Ski Club was incorporated in 1965 with 164 members. In the 1980’s, the Club membership reached over 2,000 members. In 1992 there were over 1,000 members. The Oklahoma City Ski Club has developed into an exciting multi faceted organization offering opportunities to enjoy skiing and other sports, to meet people, to make lifetime friends, and to participate in varied group activities.

The first ski trips were made via cars to Colorado and New Mexico. In the good old days a weeks lodging in Aspen was $70.00 per couple! As the prices rose so did the enthusiasm and membership in the Club. Harvey O’Mealey, the Club’s first official President, 1959-60, told of their first trip to Aspen. There was one SINGLE chair lift and it took 45 minutes to get to the top. The lift operator would throw a fur coat around the skier on the way up and then it would be sent back down on a chair. The good part was that you could get a week’s ski lessons for $20!

In 1962, the Club chartered its first sit-up bus for a trip to New Mexico. The Ski Club was the originator of the idea that Oklahomans are overnight from most of the Colorado/New Mexico ski areas, and in 1966 convinced a local bus company to build a sleeper bus, guaranteeing the Company 10,000 miles the first year. There were 13 trips that year. The Club had difficulty meeting the commitment and the bus would stop along the way through western Oklahoma and the Panhandle, picking up people in order to meet the needed quota.

By 1970 trips were leaving most every weekend and the name was changed to the Oklahoma City Ski Club. Trips to Canada, California, Idaho, Wyoming, and Europe had been added to the trip schedule. 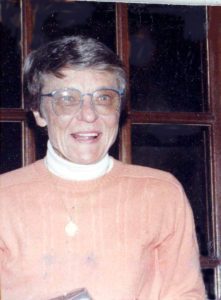 Nick Denner, president 1970-71, claims his was the best year of all because that was when Joan Sneed became Executive Secretary. She had said she would take the job for one year only, but how fortunate for all of us that she didn’t keep that promise. Patty Sneed Cason, Daughter of Joan and Lee, has maintained the family tradition by being the present Club Administrator.

There were bus problems throughout the years, but one of the most memorable was the Golden Eagle Bus in 1980-91. It got off to a disastrous start by arriving 7 1/2 hours late to pick up the skiers. Everyone gathered at the Myriad at the usual 5:30 PM. loading time. After several hours, with the skiers lined up sitting along the Myriad wall eating their sack lunches and rodeo spectators staring at them, Joan took off in her orange VW; cruising around the city to see if she could find the bus! A call to their Dallas headquarters brought the response that they had left at 1:00 PM., however, it rolled in at 10:00 PM. John Perkins, President at the time, referred to it as the “Golden Goose.”

Though the Club continues to be a great organization, people join not only because of an interest in the sport of skiing/snowboarding and other planned activities, but mostly because of the strong camaraderie among members.The fun is endless and the friendships will last a lifetime. After 52 years in business, the club remains strong. The Oklahoma City Ski Club is truly a club for all seasons.